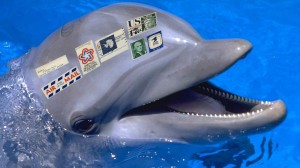 What is it about dolphins?

A very good friend of mine (well, I say a ‘very good friend’ but then I value friendships in the same way you might value your refrigerator) has been awarded a trip for the whole family to swim with the dolphins in Florida.

Why do people go all funny whenever dolphins are mentioned? They’re quite dopey looking and they’re not exactly fluffy and cuddly. I don’t even know if they taste good because I’ve never eaten one (as far as I know).

I can’t see what all the fuss is about; I wouldn’t get any more excited about splashing about with Flipper and his pals than I would mixing with any other group of mammals, but I don’t suppose they’d sell as many trips to ‘Mingle with a Herd of Cows’.

Anyway Frowny and Flower Girl really like the idea and are quite envious about it.

Smiley said that they ought to consider the realities of taking me on a flight to Florida for 9 hours. And then add in the 3 hours or so that they’d have to keep me entertained in the airport beforehand, the taxi rides, the hotel accommodation, the sleeping arrangements, the restaurants…

Eventually he said it would be far easier to bring the dolphins here.

And for once I think he was serious.