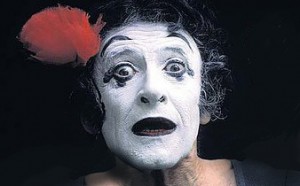 “It’s good to shut up sometimes.”

I didn’t say that, Smiley did.

Except he didn’t. It was some guy called Marshal Marco or something like that, who I’ve never heard of. Smiley says this Marco bloke is supposed to have made a living out of not talking, but at some time he must have said something to someone else, who wrote it down. Then it was read by thousands of people, probably changed loads of times along the way and eventually Smiley says it as if it’s some original piece of wit.

My point is, what’s the point? He said this to him… she said that to her… they said that to them… and on and on, blah, blah, blah, talking and talking and talking. And when people aren’t talking face-to-face they’re phoning each other up or texting or emailing. What on earth can they have to say to each other that’s so important? And when they run out of things to say they start making stuff up about other people talking to each other and put it on the TV and the radio and in books. It’s exhausting. But do they ever really say anything worth hearing?

As for communication from my direction, I’m not much of a talker. Never really got the hang of it – I’m more an ‘actions speak louder than words’ kind of guy; I find I can get my message across perfectly well without doing any talking at all.

If I’m hungry I make very load moaning noises and stamp around in the hall and rattle the kitchen gate or kick the door until someone feeds me; works pretty well – I never go hungry for long. If I like someone a lot (or sometimes when I like them only a little) I’ll let them know by attempting a full-on wet and sloppy kiss, or at the very least a headlock-style hug and they soon understand my feelings towards them. And if I’m thirsty I get down on the ground and drink out of a puddle… none of this triple-latte-machi-whatsit-nonsense for me.

I don’t try to make jokes or impress people with how clever I am. I don’t embarrass myself by saying something stupid. I don’t insult people, accidentally or deliberately. If I want someone’s attention I pull their head round and they give me their attention pretty quickly. If I want them to open a door for me I put their hand on the doorknob. And when I’m happy (which is about 85% of the time) I smile. It’s simple… so what’s the point of cluttering up the air with endless chitchat?

Ok, I will admit that there are a few occasions when the ability to talk would be useful, such as when some dimwit leaves a sock stuffed in the end of a shoe they’re trying to force onto my foot, or when I’m trying to tell people I’ve just trapped my fingers under a door… but on the whole I think it’s just too much effort to bother.

This seems to disappoint Smiley in particular: he often puts his mouth very close to mine and goes “Mu-mu-mu-mu-mu-mummy!” It makes him look and sound like an idiot but he seems to like it. Sometimes he tries a “Da-da-da-da-da- (yes… you guessed it) –daddy!” variation, but I don’t know why he bothers because there’s no way I’m going to publicly admit that these two are my parents. It must bother him though because I’ve heard him telling people he’s had dreams where I talk. Sweet.

So I like to indulge him with all his writing malarkey. He thinks he has this special ability to know exactly what I’m thinking but it doesn’t exactly take a mind reader… nearly everyone I meet seems to know what I’m thinking. Ah well, if it makes him happy to write it all down who am I to get in the way of his simple pleasures? Goodness knows he has few enough of those.

As for me, I think the Marco guy at the top of the page had it about right: if you don’t have anything worth saying, don’t say anything. Which means I haven’t said anything at all in nearly fifteen years.

At least not with words.