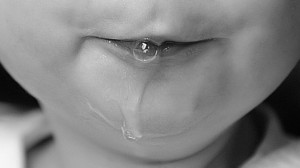 Dribble is a big, wet part of my personality.

Most people seem to regard dribble as a problem. A fault. An eyesore. A distraction. An unpleasantness. An embarrassment. A vulgarity. Social suicide. Something repulsive that immediately needs wiping away.

Oh, please… just get over yourselves.

I regard it as a pleasant fact of life. It doesn’t bother me at all, in fact I rather like it – it makes the process of chewing unpalatable foods, toys, excrement, horticulture, furniture, and pets much easier. So what’s the problem?

As regular readers will know, I’m a modest type who doesn’t like to boast about his achievements, but when it comes to dribbling even I have to admit I’m a bit of an expert. By some odd quirk of biology the amount of liquid that comes out of my mouth during a day seems to be around two or three times the amount that goes in. Climate change scientists worried about rivers drying up could learn a lot from me – I’m often to be found sitting in entire puddles of dribble, which is no easy task… just try it yourselves and see how long you can go before being desperate for a drink.

Of course dribble by it’s very nature is a clear liquid, so it can be difficult to monitor the amount produced. The addition of milk chocolate to the mix makes it far easier to track the flow, in fact it’s surprising how even a small amount of chocolate can turn a clear stream into a muddy river in no time at all.

I thought people would be impressed by my achievements but instead they spent a lot of the early days trying to turn back the tide. I couldn’t help feeling they were backing a loser on this one – hadn’t they heard of King Canute?

I once heard Smiley going on about how he’d talked to this ‘expert’ on the subject of dribble (Is this really what people devote their lives to? And why don’t these so-called experts ever talk to me?). Anyway it turns out that if you’ve had the same advantages as me of dribbling beyond the age of babyhood, your facial nerves will have developed differently and the presence of liquid on your face won’t immediately repulse you. Or something… I wasn’t actually listening very closely, got bored halfway through.

But it reminded me that back in the early days Frowny used to have a speech therapist come to the house. This woman reckoned that if she drummed her fingers gently around my mouth she could stimulate the nerve development, I would then become aware of the ‘unpleasant’ wet sensation on my chin and deal with the problem myself…

Yeah right, like I’ve ever done anything I don’t want to.

Frowny managed to keep up the drumming for a couple of weeks but she soon got tired of it. The doctor suggested some kind of sticky patches, but I ate several of these and they didn’t seem to make a difference. Eventually they settled on giving me something called glyco-pyro-something-or-other every day, which didn’t seem to stop the dribble but it satisfied their need to ‘do something’ and soon everyone decided to go with my strategy which is – as with everything –  to ‘go with the flow’.

So, having won that little battle I think it’s important to share my benefits with those less fortunate than myself. I like to spread the dribble, and the best way to do this is to attempt a kiss on the lips. Of course I don’t do this to just anyone – I have to really get to know a person first – but 10 minutes is more than enough time to assess any new relationship.

If I get the timing and the angle right I can often dribble directly into someone else’s mouth. Failing that I can usually hit an eye or an ear, or at the very least deposit a substantial quantity in the hair. I think this must be what’s meant by the term ‘shared bodily fluids’.

The only real downside to dribbling is that it tends to make the front of the shirt a bit on the damp side. I don’t mind this socially but it can get a little chilly in winter. Some of my school friends (or more likely their vain parents) have addressed this in the form of silly little bandanas tied around the neck. This was tried on me very briefly, but really… you’ve got to be kidding! If I wanted to dress up like a cowboy I’d wear a stupid hat and a tin badge… and they think dribbling is social suicide? Anyway I was having none of it and quickly let them know what I thought of their bandana by attempting to eat it.

Speaking of vanity, Smiley’s even been known to re-touch photos of me to remove all traces of a dribbly chin. The camera might never lie but those using it often do – I ought to sue for misrepresentation.

Anyway, the other night I got my own back with a spectacular success; while Smiley had his head slouched back on the sofa I managed to dribble right up his nose.

I’m not sure how far it went in but it must have been quite a way because he was dancing around blowing his nose for ages afterwards.