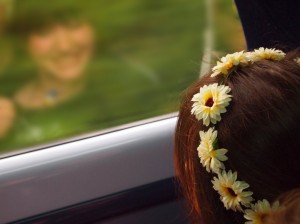 Hmm, perhaps that’s not saying much because I love a lot of people. I can’t help it. I’m a very loving person. But even by my usual standards I really love Flower Girl. She’s one of my most special-est people in the whole entire world. Ever.

It’s like having a really cool mum: all the good stuff without the bits where they embarrass you. It’s difficult to describe, she kind of looks after me, but she doesn’t. This is trickier than I thought.

Ok, let’s start again. I’ve met lots and lots of people, most of them very nice. But only Flower Girl knows exactly the games I like to play and exactly how I like to play them. And she always uses this really nice voice, which I’ve noticed she keeps just for me. She has the biggest smile I’ve ever seen – even bigger than Smiley’s, which is saying something.

When Smiley and Frowny are having one of their shouty times, Flower Girl picks me up and takes me to another room and we do Row, Row Your Boat for a bit. And sometimes when it’s late I just lie across her on the sofa and we have a cuddle and she does singy-songs and she plays music on her phone for me and I fall asleep in her lap. Not even Frowny has ever done this. Smiley has given it a go a few times, but it just isn’t the same.

Flower Girl has been there ever since before I can remember. But the first time I actually noticed her was when she started wearing big red shiny boots. I was only at around boot-height myself at the time, so they made a big impression. And the boots were only the start. Soon she was wearing really funny clothes like a clown that I’ve never seen anyone else wearing. Big dresses in bright orange and bright yellow and, well, just bright. And stripes and checks and spots and all sorts of swirly, zingy patterns that make your eyes go funny.

And then one day flowers started to grow out of her head. I’m not kidding. I’ve never seen this problem on anyone else but it doesn’t seem to bother her. Some days there were lots of little flowers. On other days there were great big, single flowers. It was seriously weird. I tried picking a few of them for her but however many times I pulled them out they’d just grow back again. Freaky.

Flower Girl has always been a bit bigger than me but I think I’m catching her up because now I’m tall enough to give her really strong hugs around the neck and shout in her ear which I think she really likes because she makes this little yelping noise. But just as I was starting to catch up with her height she began to spend more time in her room with the door locked and I couldn’t see her. Sometimes she was with her squealy friends but most times she was on her own.

I’d sit outside her room for hours, with my head leaning against the door, just waiting for her to come out. I’d call to her but she didn’t answer. I’d put my fingers under the door but I couldn’t feel her. I’ve often fallen asleep like that, just waiting for her. Eventually she always came out and then she’d give me one of her special smiles and a hug and all the waiting time was worth it.

But then one day she wasn’t there any more.

Of course, this sometimes happens; lots of people come and go. But not Flower Girl. So I went on waiting outside her room for hours even though the door was open and I could see she wasn’t there. At first I waited for a few days and then everything was ok because she came back. But then she disappeared again for a few more days, and she’d come back for a day. Then gone for a few more days. And the amount of days she wasn’t there became longer and longer.

Now I only see her very sometimes.

And sometimes I still sit outside her room, hoping that she’ll open the door, but she hardly ever does any more.

Will this eventually happen to everyone I know?

One thought on “Flower Girl”