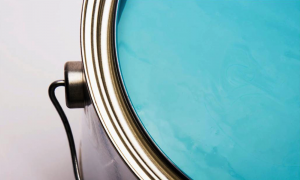 So there I was in this enormous warehouse place, more brightly lit than the sun and stuffed from floor to ceiling with, well, stuff.

It’s one of the most brilliant places in the world! Tons of space to run around, loads of places to hide, bright lights, lots of people, noise, and stuff of every size, shape and colour: sharp stuff, spiky stuff, sloppy stuff and sticky stuff – more interesting and fun than I could possibly imagine in my wildest dreams.

And I was strapped into a chair.

What’s that all about? One minute I’m at home, politely asking – slapping your hand on the front door’s glass works well – if we might go out for a bit of a run around. So me, Frowny and Giant Lady (I’m not kidding, she must be at least 9-foot-tall) all piled into the car, drove straight past the park, past the swings, past the swimming pool and ended up here.

I’m not absolutely sure where ‘here’ is. Frowny said something to Giant Lady about mixing paint but I don’t see why she’d need to drive all the way over here for that; we’ve got loads of tins at home and I would have been happy to mix them all up for her.

I was soon starting to get a bit annoyed. It was obvious that they’d completely forgotten to undo the straps so that I could have a run around and a bit of an explore, and now they were just ignoring me, which was just plain rude.

I tried to get their attention with a few loud noises and a bit of shouting, but all I got in return were a couple of nice smiles and some soothing noises. Honestly, sometimes Frowny’s communication skills are seriously lacking.

Lots of wriggling sometimes gets the message accross but it’s a bit hit-and-miss: if you get it wrong you can easily end up sprawled across a shopping aisle with a strap around your chin and your arms tied above your head. Not a good look.

So when all else fails I resort to bouncing the whole chair. I don’t usually have a very good memory but one thing I do remember is that pushchairs used to be enormous and I was really small, so trying to bounce them was almost impossible. But fashions must have changed because now I’m really big and most of the pushchairs are tiny, so these days I can bounce them around like a space hopper.

The aisles in this place were really wide and I was in the middle, just out of arm’s reach of anything to fiddle with. So while Frowny and Giant Lady chatted to each other about paint (get a life), I had a bounce around to see if I could reach anything interesting.

I was tempted by a rack of brightly coloured squeezy tubes, but ultimately I always think size matters. So I headed straight for the towers of giant plastic tubs. A few bounces was all it took to be within toe-reach of the tubs, then I stretched my leg out as far as I could and managed to hook a shoe under the wire handle of one of the really big ones with ‘10L’ written on the side. I was just pulling it towards me for a closer look when, for absolutely no reason whatsoever, the tub thing decides to crash to the floor and burst open.

I’ve never seen so much blue paint in my life! In fact, I’m pretty sure I’ve been in swimming pools that had less liquid. It was all over the floor, on the shelves, on my shoes, up my legs and on the chair.

This was a lot more fun than I’d bargained for but hey, never look a gift horse in the mouth (I have absolutely no idea what that means). So, still strapped in the chair, I stretched out both legs, leaned both arms over the side and got stuck in. Literally. It was sticky and creamy and slimy and smelt very, very, blue.

As if this wasn’t enough fun for one day, Frowny and Giant Lady both started furiously rummaging in their bags and pockets, producing nothing other than a tiny little tissue, then decided to join in as well – taking the game up a notch by adding in some very impressive dance moves. At first Frowny started rubbing the tissue all over my fingers which seemed a bit silly when there was so much paint on offer elsewhere. But maybe she didn’t really like the splashy-painty-game because she soon ran off for a game of hunt-the-tissue while Giant Lady decided to stay and hold my hands above my head.

Of course, Frowny’s a world-class champion at hunt-the-tissue and she soon came dashing back trailing a long blue piece and got straight back into the rubbing. Loads of people had walked past by this time and I couldn’t believe none of them wanted to join in.

But of course today’s grownups have a really short attention span so they soon tired of the game and decided it might be more fun to paint blue lines on the floor with the wheels of the chair.

Then a quick trip to the toilets (and a lot more furious rubbing. What is it with Frowny and all the rubbing?), back into the car and home in time for tea.

An afternoon well spent I reckon.

P.S.   We brought lots of the blue paint home with us to show Smiley (on the chair, the car, the shoes, and lots of the clothes). And then he spent his whole evening in the downstairs bathroom, scrubbing away at something or other and practicing all the rude words he knew. Weirdo.

One thought on “Overcome with emulsion”