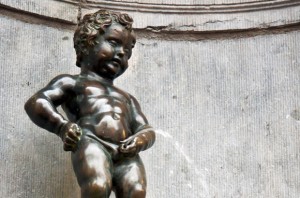 Sometimes when you’ve got to go, you’ve just got to go.

Though, unlike most people, I don’t believe in bottling things up so I just go whenever and wherever I like. Most of the time this is an uneventful experience as I wear these huge nappies (yes, I know what you’re thinking; exactly like a NASA astronaut) which catch the lot. I don’t even have to stop what I’m doing at the time.

As some of you might remember from previous posts, I don’t drink a lot… at least not in the sense of drinking from cups. So what I tend to do is catch up on my liquid intake whenever it’s convenient, say while I’m lying in the bath or when I go swimming. And when I do drink, I drink a lot.

I have no idea exactly how much one of those nappies can hold but it’s plainly not enough because they seem to overflow quite regularly. Then we’re usually looking at wet trousers, a trickle in my wake or a small damp patch on the sofa.

However, there are times when things get a little out of adjustment; apparently some of my engineers don’t have quite the same level of experience as those at NASA, or it might be that Johnny Peanut wants to come out to play… I’m sure you’ve all been there. And on those occasions it’s best to stand well back because we can sometimes be talking about a flood worthy of floating Noah.

At the lowest level we might have a modest cascade from the bottom of the chair while I’m eating, usually followed by the happy sounds of people dancing.

Moving up a rung you can try the same thing while sitting in one of those little seats on a supermarket trolley; actually it’s a few years since I’ve managed to fit in one of those, but you can achieve much the same effect from a wheelchair. Anyway it’s a particularly good location because you’re mobile and it can take a while for people to realise that they’re traipsing through a little yellow river. Surprisingly slippery too.

Doing the same thing in a car doesn’t work very well because the seat catches all the moisture and it can be quite a while before anyone realises what’s happening. But I still try to do this at least once in every car we own… otherwise they just never smell right.

If you’re really experienced you can try for a double whammy. This is tricky because it involves a lot of bladder control and self restraint. What you do is wet the nappy but only empty half your bladder. Hopefully some good Samaritan will notice quite quickly and come to your rescue. During recent years they’ve tended to change it while I’m standing up and there’s a critical window of opportunity between taking the old nappy off and putting the new one in place: that’s when you let the remainder of your bladder go. This has the effect of a loose fire hose and you can’t really predict where the spray will go, but often you can score a few really good hits. Ah, the happy smiles on their little faces and the whooping and hollering is a joy to see.

But for the ultimate in accuracy and effectiveness you just perform the same trick first thing in the morning as they’re getting you out of bed. You don’t even have to use any self-restraint or bladder control for this one, just lie there and wait for the right moment, and as someone leans their face in for a closer look… Bam! You just let the lot go.

Honestly, the sense of satisfaction is unmatched. Yes it’s a little damp, but very liberating.

You should try it.