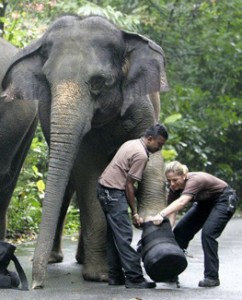 I’ve always had a bit of a problem with footwear.

In fact I hate boots.

I don’t even like socks – I didn’t start walking until I was four years old (more of that another time) and it can take me up to a year to get used to the feel of a new pair of boots, by which time I’ve usually managed to destroy them or grow out of them so we have to start the whole cycle of torture again. Quite frankly I’d be far happier to go around barefoot. Much more comfortable and just as nature intended.

Ok, I will admit that when walking on gravel or hot tarmac things can get a little uncomfortable, but then I’d much rather be delivered to a destination than have to walk there anyway. Winter can be a bit chilly on the toes but I’m sure I’d cope somehow.

Early on it was decided on my behalf – and without my consultation – that I must wear footwear of some sort. Shoes were a complete non-starter, I could get those off with just a flick of the toe, and with the speeds I was reaching (Usain Bolt? Pah!) it was also thought that a bit of extra support wouldn’t go amiss, so the consensus was that I should wear heavy boots at all times. These are more of a challenge to remove but with a little determination and the help of a solid object (the back of a car seat works well) I usually find I can get one or both off in under a minute.

If no solid object is at hand (or foot) I usually just kick my heel on something which looks expensive until the offending boot is removed for me. I once tried this on a built-in DVD player in the back of a Mercedes S-class and you wouldn’t believe how quickly they took the boots off.

I will admit that wearing big boots does have some advantages: if you want to kick your way through a panel door or a plasterboard wall then a pair of substantial boots is highly recommended. And it’s not too taxing to tap someone in the nose while they’re struggling to lace the things up. I once kicked a toddler in the face while in the queue for the checkout; well, she was an annoying little brat and it did get me out of the shop and back home very quickly. But on the whole boots slow me down.

Now don’t go jumping to conclusions and assuming all of this behaviour down to my sheer determination not to wear footwear of any sort – ok, 90% of it is that – but some of it is due to the negligence of others: you’d be amazed at the number of times I’ve tried to tell people that I have a stone in my shoe or that it’s uncomfortable in some way. The most incredible incident took place in a shoe shop which carefully measured and fitted my feet for a pair of new boots… only when we arrived home did Smiley discover that the balled-up paper was still stuffed in the toes. On another occasion school sent me home with a sock stuffed in the toe. Ouch.

And to make matters worse, most of the people who look after me think the remedy to my kicking the blasted things off is to tie them doubly-tight. This can be excruciating, both for me to wear (making me more determined than ever to get them off) and for the person being kicked in the face while they’re trying to untie the knots.

I ask you, is it any wonder I’ve grown up with an anti-footwear fetish?

Anyone with experience of Special Needs suppliers will probably be familiar with Piedro boots. These could hardly be described as the cutting-edge of fashion but to judge from the feet of other people I see that might be a good thing. They’ve done the job well enough over the years: they’re stiff and relatively strong (even if the lace hooks do always bend off in the first week) but hardly what I’d call comfortable. In fact I’d go further and call them decidedly uncomfortable. We had a brief flirtation with Caterpillar boots but as I was able to pull the sole off one of these on the first day they were consigned to the drawer Smiley refers to as “Expensive Mistakes”.

Now to the problem.

After 10 years of walking about in clumpy boots my feet have started to look decidedly odd: the bones at the sides have begun to protrude and I’ve been getting various calluses and blisters. Frowny and Smiley aren’t the most observant people in the world so the only way I could persuade them to take a proper look was to refuse to walk altogether until they did something about it.

They consulted various specialists who, as usual, umm-ed and ahh-ed. Apparently ‘old’ thinking is that boots should be stiff and offer lots of support, while ‘new’ thinking is that boots should be soft and as close to the sensation of walking barefoot as possible. Very little evidence seems to have been offered either way (at least not to me) so as we’ve tried the ‘stiff’ option for several years, this summer we went ‘soft’ in the form of canvas Converse boots. Ok, they were cheapo Converse rip-offs… times are hard.

Much better! I was back on my feet again and running hard. Trouble is they weren’t up to my levels of daily abuse and I was stripping the canvas in a week. Good job they didn’t pay full price for the brand name. After four pairs it was decided enough was enough and that they’d have to address the problem properly.

Then Smiley noticed one of Frowny’s more Bohemian friends was wearing a pair of ex-NATO Desert combat boots. Ideal. Soft straight out of the box yet tough as, well… old boots. Normally it takes me a few weeks to get used to the idea of anything new on my feet but these were great straight away: soft enough to run in but still tough enough to give someone a bloody nose.

Of course, they may be NATO combat-tested, but are they up to the sort of abuse I’m likely to give them?

NATO boots destroyed after first day back at school. So much for combat testing.

Ah, well… back to the drawing board.

3 thoughts on “These boots were made for… walking?”