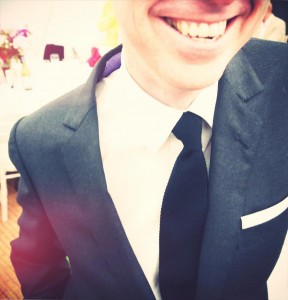 What is it about Smiley?

I mean, why exactly does he smile so much? It’s not as if he has that much to smile about; as far as I can tell he seems to spend all of his days sitting at a desk without anyone else to talk to or play with… just listens to the radio and taps away on his computer. Perhaps that’s why he has all those little hobbies I was telling you about – in an attempt to stave off the boredom. Yet there he is, every day, grinning like an idiot. Maybe it’s a nervous thing.

But the best thing about Smiley is that he plays with me.

Now that might not seem like such a big deal to you, but I’m not talking about sitting there and occasionally handing me a toy; anyone can do that (and that’s what most people seem to think constitutes ‘playing’). I’m talking about a real game like Toe Monster where he gets down on his hands and knees and chases my bare feet around the room. Or finding a blanket to put over my head, which if you haven’t tried it I can assure is just about the funniest experience known to man. Or proper Rough and Tumble on the living room carpet.

I really like all this physical stuff, but most people who look after me think they might hurt me (yeah, right…) or cause me to fall over or some other nonsense excuse. Come to think of it maybe they’re more worried I’ll hurt them, which is a fair point – I do get quite excited and sometimes I don’t know my own strength. But Smiley just gets stuck in and goes for it.

Of course Frowny’s great in her own way, and isn’t too bad at the playing lark, but when Smiley’s in the right mood – which is not always – I sometimes laugh so much I can hardly breathe. If he can get Curly Top involved in the games as well it’s even better.

Let’s see, how would I describe Smiley? Well apart from the idiotic grin he’s not very tall, only an inch or so taller than me and I’m gaining fast. He’s quite skinny and has a hole in his head. Well, not exactly in his head, a hole in his hair would be more accurate. Bit like a monk. He also keeps his hair very short which is a big nuisance for me as I can never grab a handful like I do with other people. No idea how old he is, he’s fairly wrinkly so… 100 maybe?

He’s surprisingly strong for someone who looks so wimpy, though these days he huffs and puffs a bit more than he used to when he’s carrying me. Ok, I’ll admit he shouldn’t have to carry me, I can walk perfectly well, but sometimes I just can’t be bothered or don’t particularly want to go where they’re trying to take me. But I’m quite happy if someone else is willing to make the effort. Smiley’s still a little bit stronger than me (unlike Frowny) and can just about hold me down during the whole changing and medicine ritual, but it won’t be long before I can sit on him and see how he likes it.

Another of the other things he does that makes him different from Frowny is all the singing, humming and whistling. It drives everyone else completely nuts when he gets a tune stuck in his head but I rather like it because I always know when he’s in the house.

Anyway I’m sure he must be lonely when he’s working, so I like to seek him out at every opportunity to see if he’s up for some playtime. And I really do mean every single opportunity. He used to work in a bedroom upstairs which made it easy for me to see him over the glass gate (Did I mention the glass gates? Maybe I’ll save that until another time). If his door was locked I’d just rattle on the handle or lie on my back and kick the door for an hour or more until he eventually gave up on what he was doing and came out to see me.

These days it’s a bit trickier as he has this enormous shed thing at the bottom of the garden. I don’t usually go in the garden during the winter (possibly because I use my hands to dig in the wet soil then wipe them all over everything inside the house. Hugely entertaining for me, though nobody else seems to like it) but in the summertime if I’m outside I go straight for the shed to see what he’s up to. He doesn’t usually come out straight away but if he’s left the windows open I can get a hand in and do my best to yank down the blinds or pull wires from the back of his computer. That makes him come out pretty quickly. Usually he keeps the windows closed – which is odd because he must be sweltering in there – so I just slap on the glass until he comes out – usually muttering something about not being able to concentrate.

One of the best things Smiley does is talk to me…. no, it’s more than that; I don’t really talk (at least not out loud), as the words get all jumbled up inside my head so anything I want to say just comes out in a series of funny noises. But Smiley has a way of doing the talking for me; he sits there chattering away to himself keeping up both sides of the conversation and most of the time he’s spot-on with exactly what I was thinking. Uncanny. Even when he doesn’t get it right I’m quite happy to sit and listen… it’s a lot easier than bothering with the effort of making my own conversation. I’m not so keen on the daft voice he seems to give me, but hey, you can’t have everything.

Bad points? He gets very angry sometimes; shouts at me when I’m pulling a door off its hinges or when I stick my finger in his eye or grab a handful of the skin on his neck and twist it… that’s possibly why some people are wary of playing rough and tumble with me, but Smiley always comes back for more. He’s also not very good at the whole ‘sympathy’ thing, so if I have any aches, pains or broken bones I go looking for Frowny.

But all in all I could probably do a lot worse.

I think I’ll keep him.