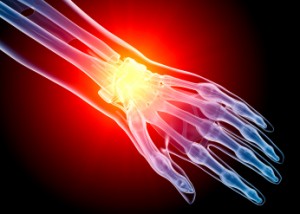 I fell over on Saturday. Twice.

Smiley & Frowny took me for a walk in the woods… well I just wasn’t in the mood so was having none of it. Normally I quite like a walk but that day I had other plans… ok they were a bit unspecific – even I didn’t know exactly where I wanted to be, but I knew it definitely didn’t involve walking in the woods. So every time they got me out of my chair I turned round and headed straight back towards the car. They tried putting me back in the chair and pushing me further into the woods in the hope that when they got me out I’d have lost my bearings but hey, I might be ‘slow’ but I’m not stupid.

Anyway twice I was building up to a sprint when WHAM!… down I went. Those tree roots are a genuine health and safety issue. The second time I banged myself up pretty badly, took a lot of the skin off the palm of my hand and walloped my wrist.

When we got home they cleaned up the graze but the wrist was pretty painful. As you all know I’m not one to make a fuss so didn’t say anything about it, but it took them until Sunday evening to notice me still cradling it and decide a trip to Casualty was in order.

Now I really like hospitals. There are endless corridors to run down, doors to bang open and slam shut, taps to turn on and off, loads of stuff to interfere with, people everywhere and best of all, smooth surfaces to run on with no tree roots to trip over. Last time I was there I had a really bad cut on my foot, which was handy because it made it easy to keep track of my route with the trail of bloody footprints on the shiny floors and the men with mops following me around.

This time Smiley walked me up to the desk – at first there was a bit of a queue so I amused myself by looking in people’s bags and playing with their hair, but then they all seemed to remember that they had somewhere else to be and we went straight to the front. The nurse presented me with a long form to fill in which I treated with the contempt it deserved. Honestly, just who did she think she was dealing with here? Isn’t that what parents are for? There was far more fun to be had in exploring the waiting room.

Smiley was holding me pretty firmly but he got distracted when I licked his eye so I set off for a wander. I spotted one young woman who looked very miserable, sitting there in a dressing gown with her head in her hands, but just as I was about to cheer her up the nurse announced that we should go straight through to the children’s department. I was a bit annoyed about this but I quickly got over the disappointment when I saw all the new people I could introduce myself to. But once again, before I could make any new friends, they told us to go into a little room behind a curtain. Well I took one look at the room with its little bed and its plastic chair and decided it was completely rubbish compared with all the excitement outside, so I flopped to the ground and took off on my hands and knees under the curtain. Smiley gave chase and tried to get me back on my feet but I can assure you it’s surprisingly difficult to pick someone up who doesn’t want to be picked up.

Those of you paying attention might have noticed that the wrist wasn’t slowing me down much. The doctor lady who had magically appeared at my side must have been thinking the same thing – to tell you the truth in all the excitement I had completely forgotten about it. Doctor lady was very nice so I let her prod and poke me for a bit. Frowny seemed a bit flustered and tried to assure her that I really had been holding the wrist all day but the doctor didn’t look convinced. No swelling, no bruising. She didn’t actually say “Why are you wasting my time with this” but I’m sure we all knew that’s what she was thinking. She suggested painkillers and to come back in a couple of days if it was still a problem.

And so we left… bummer! A potentially excellent night out ruined by an efficient National Health Service.

As soon as we got back in the car I remembered my wrist was still hurting so I went back to holding it again.