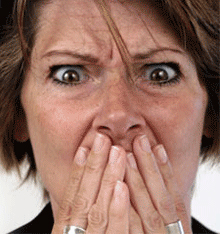 I’m not at all sure what the fuss is all about.

There I am, lying in the bath with my finger in my eye and Curly Top says “That’s disgusting!” What’s so disgusting about putting your finger in your eye? I’ll bet you’ve all done it at some time. Of course if you’re as talented as me you’ll be able to hook the end of your index finger right round under the eyeball and make your left eye go in a different direction to your right. I do this quite a lot because I like the colours and funny patterns it makes. Smiley and Frowny have been told to stop me doing it… some nonsense about ‘going blind’ or something, I wasn’t really listening. But honestly, how are they supposed to stop me? As soon as they turn their backs I’ll just do it again.

While I’m on the subject, that’s not all you can do with your finger. If I’m bored with sitting in my chair – usually either waiting for food to arrive or when I’m waiting for everyone else to finish eating – I sometimes stick one of my smaller fingers right up my nose as far as it will go and make a kind of clicking noise with the bendy boney bit inside. That one really freaks them out. I tried this once on Smiley’s nose when he was carrying me out of the house to strap me into the car. I was a lot younger then; my fingers were very small and his nose looked very large so I thought I’d see how far up I could poke a finger. It turned out I could push it all the way up and hook it over the top into a kind of hole. I held on like that for a while but in the end it was too funny watching him hop around and I had to let go because I was laughing too much.

There seems to be a very fine line between what’s funny or disgusting and I’m not sure I completely understand the rules. For instance, when I was very little one of my uncles discovered I’d never tried ice cream and decided to give me a bit of his on a spoon. He held it up for me to taste and I stuck out my tongue and then everyone laughed. Quite frankly I was a bit annoyed by this, not so much by the laughing as by the fact that I wasn’t getting the ice cream. Apparently the thing that was amusing them so much was the fact that the end of my tongue was ‘forked’ when I stuck it out. They kept holding the spoon just that bit too far away for me to reach so that I was having to stick my tongue out as far as it would go. Frustrating. Eventually they got bored with this and just gave me the ice-cream so it turned out ok in the end and no-one mentioned the tongue thing again. Fickle lot.

I suppose the tongue isn’t really what you’d call disgusting so much as fascinating. Now if you want disgusting you can’t beat eating things. I’ve already told you about the various types of poo worth trying, but did you realise the sticky jelly stuff inside nappies is also good to eat? Leaves quite a dry taste in the mouth so you don’t need too much of it, but you can always amuse yourself by spreading the remainder over the sheets and carpets.

Of course if you’re thirsty then urine isn’t a bad drink and it’s always on hand. I usually refuse all drinks on principle – I can never remember what the principle is, but it’s something I stick to – so I generally get very thirsty by bath time. I never understand why more people don’t enjoy soapy water and it’s even better once you’ve pee’d in it… slightly salty but well worth a try.

Anything else? Well you can’t really count runny noses because everyone have those. And it’s hardly my fault if they never give me a tissue to use. Like most boys what I usually do is rub my nose on my sleeve or trousers, but why stop there? Sometimes I’ll wipe it across a wall, the sofa or the carpet – whatever’s closest. In fact now I come to think of it one of the best places to rub it is in people’s hair; Frowny’s is especially good for this as she’s got so much of it and it’s always dangling in my face.

And that’s it. Nothing really out of the ordinary.

Well, unless you count the nail biting. Of course, lots of people do that but I notice they don’t really put as much effort into it as I do… most of them seem to stop about a third of the way down the nail but with a bit of perseverance you can go a lot further. Ok there’s usually a bit of blood to deal with but I’ve never been the squeamish type. And why stop with your fingernails? Obviously you’re not all going to be as flexible as me but I find while I’m waiting for my fingernails to grow back a toenail makes an equally good snack between meals. Often better in fact because they smell so good at the end of the day. You have to be a bit more careful with toes because if you go too far the toe goes bright red and swells up for a few days and then you have to see the doctor for more medicine. But on the bright side it gets me out of having to walk for a while.

So what’s all the fuss about? It’s not as if I’d eat a croissant or anything like that. Now that really would be disgusting. 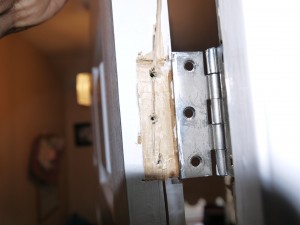 I spend a lot of my time testing things around the house.

I recently mentioned how easily ornaments can be broken – anything as fragile as a vase is just asking to be broken, I mean glass or ceramics are hardly materials I’d choose to stand up to the abuse of day-to-day family life. All I’m usually trying to do is have a look at it and see if it falls into one of the three main categories:

If none of the above, drop it and move on I say.

Now if it’s a little ceramic model of a cat or a flower girl or something, again, how can I be held to blame? If they’re going to make it look like a toy it’s hardly my fault if it’s not strong enough to be played with, so again, not guilty.

It’s the same with doors. I like to open them and slam them shut just to make sure they’re working ok (I once saw a machine doing this to a drawer in a big furniture shop – I could have sat and watched it for hours). Fifty or sixty times is usually a good enough test but in some cases I like to keep going a lot longer just to make sure. Another good test of a door’s strength is to open it all the way and then keep on pushing a bit more so that you can test the hinges as well. With some doors you can’t open them far enough but in a lot of cases the hinges just lever straight out of the wood and you can pull the whole door down. You’d think Smiley would be grateful to me for pointing this out but he seems to get very bad tempered about it. He usually tries to re-mount the door by putting the screws into different parts of the frame but it’s surprising how easily a wooden door frame splits from top to bottom after I’ve tested it a couple of times. I think he really ought to give up and leave the doors off altogether.

You wouldn’t think a radiator was an accident waiting to happen would you? They look innocent enough just sitting there but I’ve found if you pull really hard on the top edge they’ll often pivot away from the wall in a cloud of brick dust. But again, do you think I hear any thanks for my efforts?

That’s another odd thing I don’t understand; if we have all these radiators everywhere, why do we still have the old fireplaces? I had a good look at one of these recently but it was just as hopeless; I pulled this big black metal piece off the bottom, banged it a few times on the hearth to see how strong it was and all the little green tile things just shattered. I couldn’t believe how easily the first few broke so I tried banging a few more and they were all just as flimsy. It’s a good job I pointed this out before someone got hurt.

In fact there are all sorts of potential dangers around the home. Plasterboard walls are surprisingly thin if you lie on your back and try kicking them (which is also a good test for checking the strength of door panels).

Now that I’m a bit taller I’ve found that light fittings often pull away from the ceiling with just a quick tug. But don’t go away with the idea that I’m super-strong, I pulled the letterbox flap off the door the other day with hardly any effort at all.

And don’t get me started on mirrors and picture frames – did you know that they’re usually only held in place by one or two screws and a bit of string? Madness!

Honestly, you take your life into your hands every time you walk around the house. I’ve heard people saying that most accidents happen at home and with the standard of shoddy workmanship I see in most people’s houses I’m not at all surprised.